How Aros helps IRO stay at the forefront

Aros electronics AB has worked closely with IRO AB for many years and the companies have been merged since 2012. IRO was founded in 1958 with a new, invented positive yarn feeding system for circular knitting machines. Today, following the merger, IRO AB is active in two fields; yarn feeders and permanent magnet motors.

IRO is a world leading manufacturer of yarn feeders. Modern production technology is the basis for the high-performance and cost-effective products with hard to copy outstanding technology solutions. After many years of close collaboration with IRO, Aros has an extensive knowledge of the end application. Our task is to supplement IRO’s mechanical skills with motor design, software and electronics.

The motor is designed in close collaboration with mechanical engineers. Stator plate cut, how it should be wound and rotor magnets design is determined. Optical and mechanical sensors are also developed in close collaboration with IRO. The rotation of the motor is controlled by accurate, highly responsive electronics, without the need to incorporate a pulse sensor, which enables further cost reduction. A technique developed in-house enables a mathematical algorithm to be used to measure the current in the motor and convert this information to dictate the position of the rotor.

A benefitial cooperation between sister companies

The close collaboration for a long time, between IRO and Aros, has resulted in successful launches of new products. Expertise and experience exchange facilitates the process to create new, competitive solutions.

Read more about IRO at www.iroab.com. 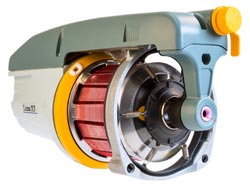